Carmelo Domenic Licciardello—Carman, to you and me—has died at the age of 65.

Prone to nostalgia though I am, I cannot overstate Carman’s importance to me. When I came to faith as a teenager, at a time when the top five of the Official UK Top 40 looked like this:

Carman offered a comparable musical experience—and more!—with lyrics firmly rooted in a particular version of Protestant Christianity. Not only did Carman’s songs help consolidate my early faith, but they allowed me to evangelise in a particular way. Sometimes friends would ask me what I was listening to on my portable cassette player (ever sociable, me) and, more often than not, it would be Carman. I’d describe this to my friends as ‘church music’ and . . . well, no-one fell down on their knees in repentance, but talking about Carman gave me the opportunity to pin my colours to the mast. And I dare say this is something Carman would have approved, given his militaristic, triumphalistic take on Christianity. 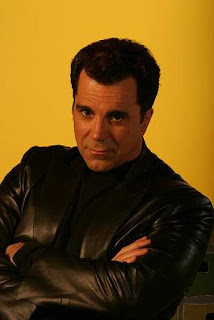 These days I have (shall we say) reservations about some of Carman’s lyrics and the theological positions they reflect, but I don’t regret and am not ashamed of having bought into them in my early teenage years. And I suppose I regard myself as someone who is still prepared to listen to Carman without irony (though usually with headphones on). Even the other day, I was listening to snippets of his best three albums: The Champion, Live: Radically Saved, and Revival in the Land, as well as some of his less-impressive contributions to musical history: Comin’ On Strong (which happened to be my first ever album, CCM or otherwise) and Addicted to Jesus. This latter album marked the beginning of the end for me in terms of actively seeking out Carman releases. Carman always was a showman, and his story-songs (e.g. ‘The Champion’, ‘A Witch’s Invitation’) were usually the highlights of his tapes, but even this aspect of his persona was beginning to embarrass me somewhat by the early 1990s, when certain CCM artists were showing stylistic and even genre-melding innovation. It’s hard to believe that ‘Satan Bites the Dust’ was released in the same year as, say, Mortal’s ‘Mytho-X’ and occupied the same CCM subculture.

Anyway, there are sure to be more incisive and better researched tributes to Carman out there—I’m just trawling through my memories and albums and wanted to mark my gratitude for Carman in some way. To conclude, I thought I’d list the Official Terry J. Wright Top 5 Carman Songs here. Be sure to follow the links and give the Lord a praise offering!

#4 Revival in the Land