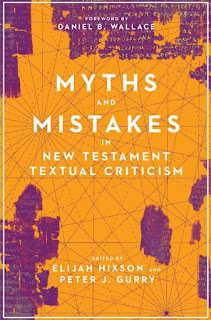 The problem here is that while the logic appears sound, the data used in the charts is often outdated. This means Christian educators and apologists relying on this data are in fact relying on false data to prove a point. In Myths and Mistakes in New Testament Textual Criticism, edited by Elijah Hixson and Peter J. Gurry (Downers Grove, IL: IVP, 2019), James B. Prothro contributes a chapter (‘Myths about Classical Literature’, pp. 70–89) in which he tackles how to compare the New Testament texts and classical literature responsibly. I don’t want to go into Prothro’s chapter in detail here—you should read his essay and the whole book if you can—but I do want to produce my own chart comparing the numbers. And I want to do this partly so I can have a quick reference point for my own occasional teaching, but also because Prothro himself doesn’t tabulate the data. However, for his numbers, Prothro appears to draw largely from an article by Clay Jones which does contain a chart.

The following table is essentially a version of Clay Jones’s one but with minor amendments drawn from Prothro’s essay, pp. 75–78. It’s the kind of chart that will need to be updated from time to time as new manuscript discoveries are made. Please do leave a comment if you know of any numbers that need to be taken into account here.

Email ThisBlogThis!Share to TwitterShare to FacebookShare to Pinterest
Labels: Scripture