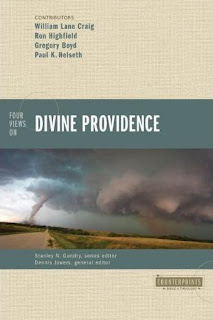 Zondervan’s Counterpoints is a book series in which proponents of particular views held by Evangelical Christians (interpret ‘Evangelical’ broadly) are invited to state their positions and then respond to those of the others—not entirely unlike an electoral hustings. Four Views on Divine Providence features essays by Paul Kjoss Helseth (‘God Causes All Things’), William Lane Craig (‘God Directs All Things’), Ron Highfield (‘God Controls by Liberating’), and Gregory A. Boyd (‘God Limits his Control’). These essays and responses are sandwiched between the editor’s introduction and conclusion.

None of the contributors offers any genuine surprises in what he outlines. Helseth’s essay is an effective statement of a traditional Reformed omnicausality, while Boyd’s is the same for an account of open theism. Craig’s chapter is essentially a case for Molinism. Highfield’s piece is perhaps the most distinctive of the four: he presumes divine omnicausality but recalls more explicitly the thrust of the whole biblical narrative by focussing on God’s freeing of humanity from the power of sin. Each position is capably argued and should be regarded as genuinely representative of at least part of the traditions they espouse.

The responses to each chapter are rather mixed. Critiques centre on disputed matters of freedom and theodicy; this is to be expected. However, it seems to me that some contributors play more fairly than others. For example, Helseth draws too freely from Boyd’s other writings rather than from what is actually presented in Four Views on Divine Providence; this seems disingenuous to me. Craig seems overconfident in Molinism’s coherence against the other views and its power to deliver on its claims. But other responses are more to the point: Highfield judges that Boyd’s approach to providence is not as christocentric as the latter claims, and Boyd offers an emotively insightful description of what is surely entailed by Helseth’s uncompromising account of divine omnicausality.

In summary, Four Views on Divine Providence is a decent addition to introductory and/or intermediate literature on the topic, but those who are already familiar with the views and the issues will find little new here other than some quotable passages. Of course, the spectacle of seeing four intelligent scholars entering the same field of play is always worth the price of admission. In that respect, I think Highfield is the player who emerges—narrowly—as the most persuasive.
Posted by Terry Wright at 15:56:00