Slut or No Slut? The Woman of Samaria 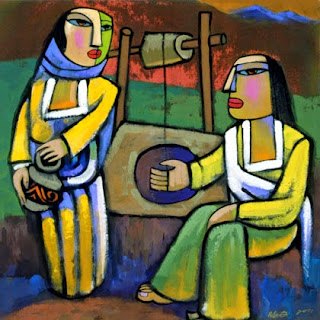 It’s very easy to leap to conclusions about why people find themselves in certain situations. Today’s Gospel reading—John 4:5-42—is a case in point. This is quite possibly hyperbole, but the woman of Samaria is traditionally a bit of a tart: Why else would a woman be married five times and be living with a man not her husband (4:16-18)? But this ain’t necessarily so. Here’s a quotation from The Women’s Bible Commentary, rev edn, ed. Carol A. Newsom, Sharon H. Ringe, and Jacqueline E. Lapsley (London: SPCK, 2012):


The popular portrait of the woman in John 4 as a woman of dubious morals, guilty of aberrant sexual behavior, derives from a misreading of John 4:16-18. In these verses, the Samaritan woman tells Jesus she has no husband (4:17). Jesus responds to the woman’s words by telling her the story of her life (4:18). The text does not say, as most interpreters automatically assume, that the woman has been divorced five times but that she has had five husbands. There are many possible reasons for the woman’s marital history, and one should be leery of the dominant explanation of moral laxity. Perhaps the woman, like Tamar in Genesis 38, is trapped in the custom of levirate marriage and the last male in the family line has refused to marry her.

What other reasons could there be for the woman’s serial monogamy? Back in 2014, I posted this on my old blog:


I first came across the idea that the woman of Samaria (John 4) wasn’t all that immoral in Gill Rowell’s The Spiritual @dventures of CyberCindy, but now Margaret Barker—whose perspectives on Scripture often are as refreshing as they are unconventional—has added impetus to this interpretation:

The woman is often presented in commentaries as having a dubious past, but she may well have been a victim of her own society. She had had five husbands, and in a society where it was not easy for a woman to leave her husband—divorcing a spouse was usually a man’s prerogative—this means she had been abandoned five times; or she had been widowed five times and married in succession to her brothers-in-law (Deut. 5.5-6; Mark 12.18-23 and parallels). In both cases the reason for the multiple marriages would have been that she was childless: bearing no child was grounds for divorce, since a man was obliged to father two children; and for the same reason, a childless widow had to marry a brother-in-law in order to give her first husband an heir. These were the Jewish customs, but something similar in Samaria would account for the woman’s having five husbands, and then coming to the well alone at noon, to avoid the other women who would have seen her childless state as a punishment from God.

I’m no Johannine scholar, but I have to say that Barker’s interpretation—that the woman of Samaria was repeatedly divorced because she had not been able to conceive—seems reasonable to me. So why do the (male) authors of the commentaries on John that I own seem to accept almost without discussion that the woman’s effectively a slut (Kruse is kinder in his commentary than, say, Beasley-Murray)? One of the things I find interesting here is that, if correct, Barker’s interpretation shows how easy it is, even in scholarship, (a) to assume the worst about others, and (b) to treat people as objects whose worth lies in their utility to us. What does it say about us, even today, when we’re more inclined readily to assume the woman of Samaria’s immorality than to probe harder (no innuendo intended) and consider alternative, perhaps more charitable, readings of her story?

And seeing as I mentioned The (Spiritual) @dventures of CyberCindy:


It is often argued or assumed that the Samaritan woman is a person of loose morals, who, because of her low standing in the community, comes to the well alone, at the height of the noonday sun, because of her shame and exclusion from society. However, when Rebekkah in Genesis 24:17ff. does the same, it is not regarded as odd that she goes to the well apparently alone. The most telling evidence against this woman is that the man with whom she is now living is not her husband (v. 18), and although she has had five husbands, we are not told why. Women did not have rights then as they do today, and wives could not divorce husbands. Her situation could have resulted from a lack of responsibility on the part of her successive husbands, who may have regarded her simply as a commodity whom they could dispose of when she displeased them in any way. Or she may have outlived her husbands, whose brothers may have married her in obedience to Levirate law. Maybe a mixture of both, we do not know, but five marriages and one live-in boyfriend don’t necessarily make this woman a prostitute, they may simply make her a (dependent) commodity for men to pick up and drop as they fancy. No wonder she takes issue with Jesus (v. 9).
From the manner with which she talks to Jesus, which is one of cantankerous well-ingrained nationalistic pride, and from her history of having had five husbands, and from her desire to be relieved of this onerous task of water collecting, we may surmise that the woman is elderly, or at least no flighty young thing. She is steeped in her own culture and religious teaching, and going to the well for water she meets an apparently ignorant young Jewish rabbi. Far from being a simpleton, or a flirt, this Samaritan plays Jesus at his own game and questions theological truth from her own perspective and identity as a Samaritan. . . .
One wonders if the woman, with such a sound grasp of her own identity and theology, is a prophetess, for she is clearly looking forward to the day when the Messiah comes (v. 25), she clearly has a theological agenda (vv. 9, 12, 19, 20) and she is clearly in good standing within her community (vv. 30, 39, 40).

Finally, to conclude, back to Gail O’Day:


When interpreters speak of the woman as a “five-time loser” or a “tramp” (as has been the case in scholarship about this story), they are reflecting their own prejudices against women, not the views of the text.